Inspired by their daughter Ava’s treatment at Great Ormond Street Hospital (GOSH) they have been fundraising together with their friends and family since 2014. Dad Clive tells us more about their fundraising and Ava’s incredible story.

In January 2014, Ava was transferred to Great Ormond Street Hospital with troubled breathing. Shortly after arriving, Ava experienced what would be the first of four heart attacks. After the third heart attack in 30 minutes, my wife, Mary-Jane, and I were told to expect the worst imaginable.

We were informed that there was a procedure that could save her, but it was risky. “Just do it,” I said. Ava was put on extracorporeal membrane oxygenation (ECMO), a replacement heart and lung bypass machine that would help clean her blood and allow her other organs to rest. Ava was on ECMO for 10 days. That little square box, no bigger than a photocopier paper box, saved our daughter’s life.

While Ava was still in hospital, we decided that we wanted to come together with family and friends to fundraise so that we could help save other children’s lives. Specifically, we decided to fund a new mobile ECMO machine. We quickly agreed that because Ava was the reason for our fundraising that our Fund should be named after her ‘Ava’s ECMO Challenge’ was born.

There has been a wide variety of activity, including a 33-mile run and bike ride from our home town to GOSH, golf days, superhero bucket collections, jazz concerts, coffee mornings, school fun days and much more. So many people have been involved, from our church and local shops to Ava’s school and even our neighbours. A friend of ours who works at the nursery Ava used to attend even shaved off her long hair. It was such a great gesture of support. 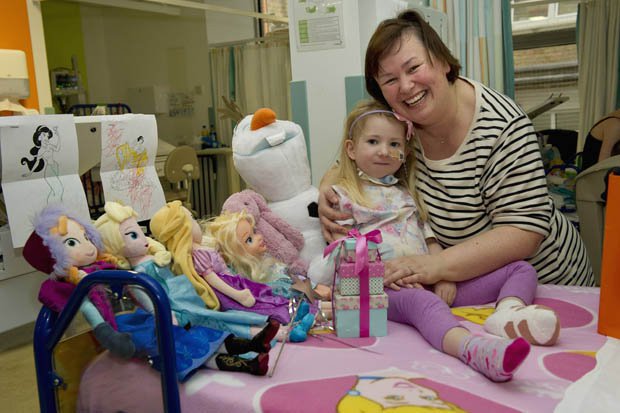 The variety of activity has been important and has meant it’s been accessible to all. Once the candle is lit, and people understand what you are trying to achieve, they need very little pushing. Working as a team has been great fun. We know we need many skills sets to achieve our goal and that we can’t do it alone.

We launched our fundraising while Ava was still very much ‘in the thick of it’. I was able to keep people up to date on what was happening with a daily blog. The fundraising also gave us a practical way for those who so generously offered us support to do something.

Ava is still not 100 per cent and attends regular hospital appointments, but it’s so fulfilling knowing that you are part of the GOSH community and you are helping to save other children’s lives. Fundraising gives us, our family and our friends a real buzz and makes us feel like valued members of the GOSH team.