Great Ormond Street Hospital (GOSH) and the Institute of Child Health (ICH) are world leaders in the development of a life-saving technique called gene therapy.

Thanks to dramatic advances in our understanding of human genetics, we can now pinpoint many of the faulty genes that are responsible for particular childhood diseases. This has opened up the potential for a lifesaving technique called ‘gene therapy’ – the precise insertion of a working gene into a patient’s DNA to replace or correct a faulty, disease-causing gene.

By resolving the root cause of genetic diseases, gene therapy offers the prospect of effective and lasting treatment for children with conditions that were previously difficult or even impossible to manage.

GOSH, together with the ICH, has been responsible for more innovative gene therapy trials than any other centre worldwide. This is thanks to our unique patient population and the partnership with the academic environment of the ICH. Seven of these trials have focused on primary immunodeficiencies. They have treated 45 patients, the majority successfully with minimal adverse side effects.

Under the leadership of world-leading scientists Professors Adrian Thrasher and Bobby Gaspar, the gene therapy team have made extraordinary progress, particularly in pioneering new treatments for children born with weak or completely absent immune systems.

Despite their early success, the team know that more needs to be done. Over the next five to 10 years, Professors Thrasher and Gaspar aim to refine and develop their gene therapy techniques so that they can be used to help children with a wider range of life-threatening and life-limiting genetic diseases. These include some metabolic disorders and certain blood diseases.

We aim to invest further in this already world-class research team whose work could pave the way for a new era of treatments for children and young people around the world.

"We've made considerable progress in this field over the past decade. Gene therapy has been refined, trialled in patients and we've learnt a huge amount. Studies we have designed here are now open in Los Angeles, Boston, Paris and other international centres.With support, I believe that a decade further on, gene therapy will be able to improve the life and health of many children with life-threatening diseases, where other treatment methods are either ineffective or non-existent.It's a very exciting time to be working in this field."

"The future for us is to build this and to make it bigger and better. We want to be able to deliver gene therapy for a whole wide range of conditions, not just the ones we started off with, of course we want to build on that as well but we want to treat far more diseases. We want to treat larger numbers of patients and not just patients at Great Ormond Street Hospital. We want to take this and make it a medicine that can be used in patients worldwide." 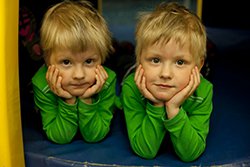 Twins Remi and Wojciech developed chronic eczema when they were only a few months old and were always getting chest infections and colds. They were referred to GOSH, where they were formally diagnosed with Wiskott-Aldrich syndrome.

Wiskott-Aldrich syndrome is a rare genetic disease and a potentially life-threatening condition. It causes many types of white blood cells, which are part of the immune system, to be abnormal or non-functional. This leads to an increased risk of several immune and inflammatory disorders, as well as autoimmune disorders, which occur when the immune system malfunctions and attacks the body’s own tissues and organs.

The only current cure is a full bone marrow transplant, which is a complex procedure carrying significant risks of serious complications. However, it was decided that this was the only option for both boys.

Gene therapy research into Wiskott-Aldrich syndrome currently being undertaken by our team brings hope of a future cure for this severe condition without the risks of bone marrow transplant.