Zoë was just a few months old when she was diagnosed with Crouzon syndrome. She has since undergone at least six operations, including pioneering craniofacial surgery at Great Ormond Street Hospital (GOSH). At birth, Zoë needed help to start breathing independently, and during her time in neonatal care her parents noticed that one eye kept rolling back into her head.

Zoë saw a number of specialists when she was just a few months old and her paediatrician, who suspected she had a form of craniosynostosis, referred her to GOSH, where she was diagnosed with Crouzon syndrome.

Amanda, Zoë’s mum, explains: “Getting a positive diagnosis was a relief more than anything else. I was much happier to know there was an explanation for the issues Zoë had been experiencing. Up to that point, several medical professionals had seen Zoë and each had identified a piece of the jigsaw, but none had the holistic view.”

Since her diagnosis Zoë has undergone at least six operations including having her adenoids and tonsils removed and being fitted with a nasal prong to help her breathe while asleep. She underwent an innovative procedure in 2009, developed by Owase Jeelani, one of GOSH’s leading craniofacial surgeons, to expand the back of her skull using metal springs to allow space for her brain to grow at a normal rate. Zoë was only the 17th child to have this pioneering spring technology fitted but her mum said: “The surgeons at GOSH are world leaders in this field and such a great team that we were happy to go with their recommendation.”

Over the coming years Zoë is going to be a likely candidate for a monobloc operation to separate the fused bones at the front of her skull which will help re-position the midsection of her face and relieve her obstructed breathing. 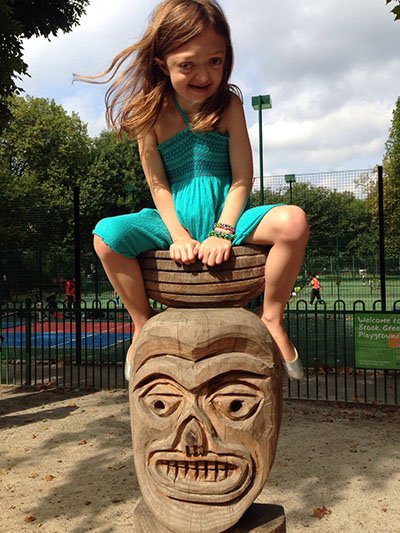 Her treatment and frequent visits to hospital have been tough on the whole family particularly during long stays on the wards. Juggling this for both working parents with two other young children has been difficult. However, as she gets older and needs less frequent medical monitoring and intervention, Zoë’s visits to hospital are fewer and, thanks to the great work of GOSH, she attends school full time. She enjoys her hobbies which include swimming, painting and playing at home.

As Mr Jeelani continues to work towards better, less intrusive ways of helping correct the shape of the skull, one of his main aims is to avoid using an externally attached frame to adjust the bones. Amanda believes that the use of such a frame can be a “traumatic experience”, particularly for a young teenager, due to its external nature and the length of time required to have it in place (c. 10 weeks). However, Mr Jeelani’s work with the memory metal springs means that the way in which the facial bones are relocated can be developed and refined making it less cumbersome and more precise than the current external frame procedure.

Amanda says: “When someone has the brilliant vision to create a new technology with potential for application across a range of conditions, we want to do all we can to support the team and help the vision become a reality. We hope to raise enough money for the surgeons to complete their research into this new technique, so they can help treat children, our Zoë included, in a better way than is possible now."