The amazing stars of Disney Pixar’s Monsters University, Mike and Sulley, brought monstrous fun to Great Ormond Street Hospital on Thursday 4 July 2013. Patients met their favourite characters and were then treated to a special mini-premiere screening of the film.
Excitement filled the hospital air on Thursday 4 July when the hospital restaurant, The Lagoon, was transformed beyond recognition into the venue for an exclusive mini-premiere screening of the new Disney.Pixar film, Monsters University.

The film is a prequel to the 2001 film Monsters, Inc and follows the blooming relationship between lovable monsters, Sulley and Mike, during their days at university, voiced by Hollywood favourites Billy Crystal, John Goodman and Dame Helen Mirren.

As the patients arrived in The Lagoon they walked down the special blue carpet and were thrilled to find that the stars of the film, Sulley and Mike, were there to greet them. The afternoon started with photo opportunities and the chance to hang out with their favourite characters.

Most guests had a very clear idea of who their favourite character was already – seven-year-old Tyshan, a patient at the hospital, was even wearing his treasured Sulley T-shirt. He was delighted to be there: "My friends will be so jealous of my photo with Sulley – I’m never going to delete it!" 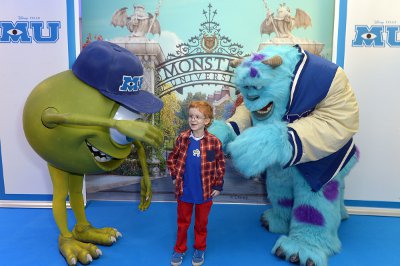 Once photos had been taken, everyone settled down to watch the film, which they were being treated to nearly two weeks before its UK general release. The film was also screened on the bedside entertainment systems throughout the hospital allowing patients who weren’t well enough to come to the main screening to still see it.

Great Ormond Street Hospital (GOSH) patient Oscar, aged eight, was one of the lucky ones who got to come along to the event. Oscar, whose favourite character is 'definitely Mike', said that he’d seen the first film lots and lots of times, and that he was excited about seeing the second one. Oscar was there with his mum, who said: "We’ve been in the hospital all week and he’s been really looking forward to it. It’s just brilliant. He’s having chemo every day so it’s just given him a little bit of a boost, really."

Niamh, a fellow patient, said that her twin brother Zach would be so jealous and that all her friends were looking forward to seeing the film. Niamh’s mum explained: "It’s her first day off the ward in over three weeks, so it’s such a treat to have something like this to come to. Sometimes it’s worth being in the hospital for a long time. Sometimes."

Needless to say, there were smiles all round – the hospital will be abuzz with monster-fever for weeks to come.