Claire is mum to eight-year-old Mia, who has been coming to Great Ormond Street Hospital (GOSH) since she was just a few hours old. In 2020, Claire will be taking part in two half marathons within a fortnight to raise money for GOSH.Mia was born with CHARGE syndrome, a rare genetic condition that can affect different parts of the body. The most common problems are with hearing, vision, the heart, airways and growth.

When Mia first arrived at GOSH, she was found to have a life-threatening heart defect called transposition of the great arteries, where the two main blood vessels leaving the heart are swapped over. Mia underwent open-heart surgery when she was four days old.

“After 11 days in recovery, Mia was discharged,” says Claire. “The staff at GOSH were wonderful. We were so grateful to have such an amazing, hardworking, dedicated and skilled team who saved our daughter’s life.”

A geneticist at GOSH recognised that some of Mia’s symptoms were features of CHARGE syndrome. Further tests and investigations revealed that Mia had severe sight loss, was severe to profoundly deaf, and was missing the balance organs in her inner ear, which would affect her ability to walk. She also had problems with her swallowing and breathing.

“Mia has had a lot of ups and downs,” says Claire. “We have spent countless times at hospital with multiple admissions, procedures, screening, scans and therapies, and she’s under the care of many health professionals at GOSH. We’re so lucky to have a strong team supporting us.”

In 2016, Claire took part in a fundraising fun run for GOSH Charity to help raise money for the hospital. Since then, Mia has been returning to GOSH for regular check-ups every month.

“In the past few years, Mia’s different symptoms have stabilised,” says Claire. “All the big diagnoses we were getting at the beginning that were difficult to deal with, we don't have them anymore. The doctors at GOSH can't believe how well she's doing.”

“Mia (pictured above at her eighth birthday party) has had to overcome many challenges, but she’s come on leaps and bounds,” says Claire. “She's a fantastic character, with a strong personality – she's not shy at all! She loves everything creative – she wants to be a fashion designer when she's older.

“She has age-appropriate language and communication skills for someone who is profoundly deaf. She's running, climbing, jumping… all of these things that a child with no balance organs finds it difficult to achieve. But it's all Mia's ever known; she’s had to learn to be adaptive.

In October 2019, Claire took part in the Royal Parks Half Marathon for GOSH Charity. “It was a lovely atmosphere: there were supporters along the way calling out your name, there were amazing runners and we were giving each other high-fives!”

Claire has challenged herself to run not one, but two half marathons in 2020 – and within a fortnight of each other! “I’m doing the runs with my brother, Martin (pictured below with Mia and Claire). I thought that if I did two half marathons, people might think that really is a challenge.” 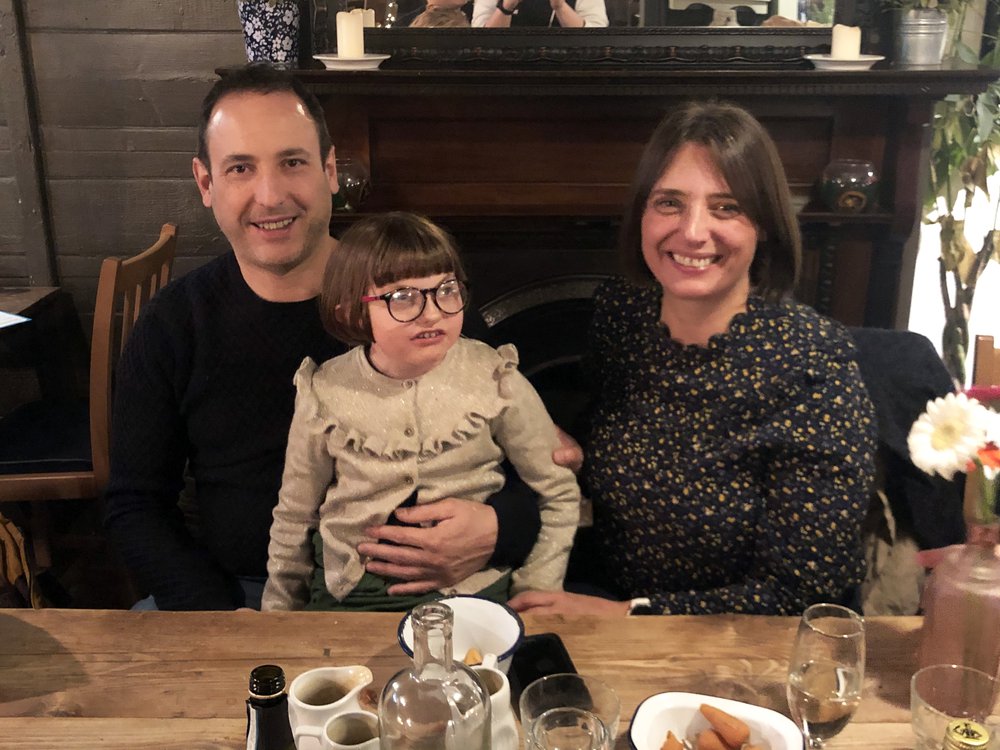 For Claire, fundraising was a big part of running the Royal Parks Half Marathon and she intends to do more of the same for her events this year. The whole family, including Mia and her brothers, got involved.

“The kids like to help, so we baked cakes together, which we sold at school,” says Claire. “We also held a coffee morning at a local church with morning cakes and muffins. We decorated it with GOSH Charity banners and told people why we were fundraising for GOSH.”

Spreading the word on social

"I also used social media to raise awareness of what I was doing,” says Claire. “On Facebook, I'd put up regular video updates to say how far I was running and what week of training I was doing. Then, I'd give an update on Mia. Because she goes to so many departments, there's so many facets to her care – one time I spoke about her geneticist, another time her heart, so people understood the different things she was treated for at GOSH.

"Mia loves getting involved with fundraising for GOSH, and she loves seeing me run. The day after I ran the Royal Parks Half Marathon, she was really excited in school and told everyone: 'My mum ran a marathon!' She's a really happy, buoyant young girl.”

If you’ve been inspired by Claire and Mia’s story and would like to take on a challenge of your own in 2020, we’re offering 50% off select events for a limited time! Run, cycle, climb or walk to create a better future for children at GOSH like Mia.