The Disney Reef, a colourful, underwater-themed outdoor play area has been unveiled at Great Ormond Street Hospital today.  GOSH Charity Children’s Champion and mum Tess Daly joined patients and their families as the new area was revealed for the first time. Joining her was four-year-old patient Elliott Livingstone, who received a heart transplant at GOSH in 2016.Four-year-old Elliott Livingstone spent a record 400 days on a mechanical ‘Berlin Heart’ at GOSH while waiting for a heart transplant. Elliott has made a remarkable recovery following his heart transplant, and his family continue to travel from their home in Hampshire for his ongoing care at the hospital. They are looking forward to spending time together in this special space.

The Disney Reef, positioned in the heart of the hospital, was designed by Walt Disney Imagineers, in collaboration with the hospital’s dedicated Play Team and patients. It brings together special lights and sensory elements, as well as Disney favourites Mickey Mouse and Goofy, Ariel from The Little Mermaid and Hank from Finding Dory - all sculpted specifically for the Reef. Every day, 618 seriously ill children from across the UK arrive at GOSH, and for those patients who spend weeks or even months on end at the hospital, the Disney Reef will be a vital outdoor space where they can spend time with siblings and family members, making treasured memories.

Matthew Grossman, Vice President of Social Responsibility for The Walt Disney Company in Europe, Middle East and Africa said: “The Disney Reef will provide a comforting and inspirational space for the children GOSH cares for. In difficult times, such as serious illness, enabling children and families to spend quality time together helps build emotional resilience, giving them the strength and ability to cope. The Disney Reef will create moments that matter, and we’re excited to see the benefit and enjoyment it will bring.”

Since Walt Disney first visited Great Ormond Street Hospital in 1951, the two organisations have enjoyed a long history of working together to create moments that matter for seriously ill children. The Disney Reef forms part of a global commitment announced by Bob Iger, Chairman and Chief Executive Officer of The Walt Disney Company, in March to reimagine children’s patient journeys both in and out of hospitals – transforming hospital settings and experiences and creating moments that matter for children and those closest to them. These moments help build emotional resilience when they are needed the most. 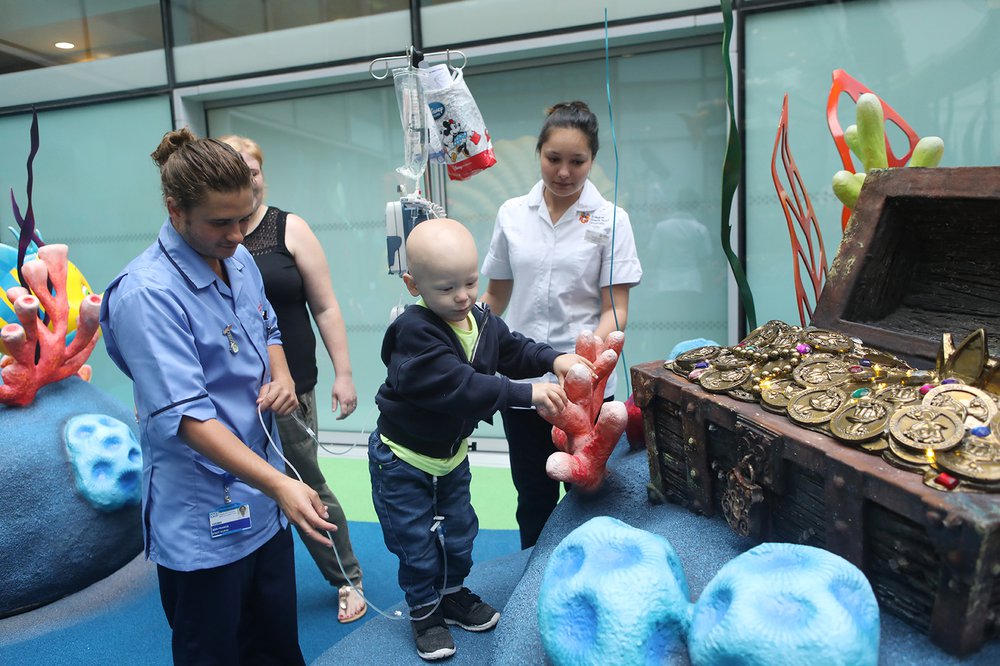 Great Ormond Street Hospital’s Assistant Chief Nurse, Herdip Sidhu-Bevan, said of the space: “Thank you so much to Disney for bringing the amazing Disney Reef to Great Ormond Street Hospital. This is a very special space where children can take some much-needed time outside, away from the busy ward environment, and where they can relax and enjoy themselves together with their families. The Reef’s design will accommodate patients with a wide range of conditions, and of all ages, so it’s truly inclusive and will be a fantastic addition to the hospital.”

Elliott’s mum Candace Livingstone says: “To officially open the Disney Reef was fantastic, Elliott loves ships and Disney, and I know he’d have so enjoyed spending time here while we were staying in the hospital. I’m sure many families will see this as a haven, a place for their children to play and to relax. I know we’ll visit time and time again when we come back to GOSH for Elliott’s ongoing appointments.”

In 2008, Disney made an extraordinary commitment to raise £10 million through the Disney Appeal for Great Ormond Street Hospital Children’s Charity which concluded in 2014. The Company has an ongoing commitment to continue to deliver magical experiences for patients and their families from mini-premieres, to character and talent visits, to bedside screenings of Disney’s films and television shows. The opening of The Disney Reef celebrates one of the future experiences patients will enjoy, and demonstrates how the money raised enriches the lives of many seriously ill children and those closest to them; including the Disney Interactive Play Area located in the Hospital’s Lagoon Restaurant.

Along with the GOSH Children’s Charity, in the UK Disney also partners with like-minded charities such as Make-A-Wish® UK, MediCinema and Together for Short Lives which all strive to bring comfort and inspiration to seriously ill children and those closest to them.