Charlie is a patient at Great Ormond Street Hospital (GOSH). Charlie’s dad, Giles, tell us why the whole family takes part in RBC Race for the Kids and the difference you are making by taking part too. 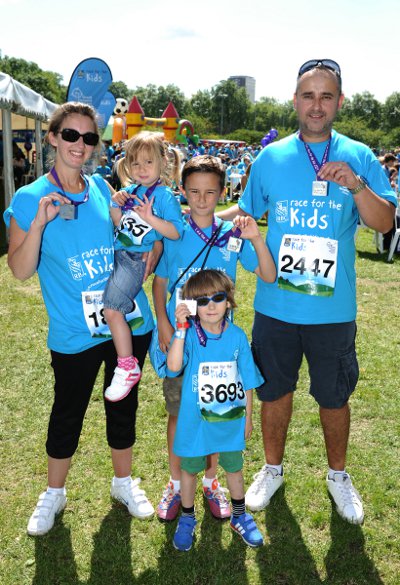 Charlie and his family at RBC Race for the Kids

“Shortly after my son Charlie was born, the midwife noticed that he was missing his right ear and that he had a lump on his right eye and a large lump on the top of his head. Charlie was taken away for tests and put into the special care baby unit at our local hospital.

“Four days later, Charlie was diagnosed with Goldenhar Syndrome, a rare congenital condition which causes bone abnormalities. This was where our local hospital stopped and GOSH took over.

“We had so many questions and needed answers, and the staff at GOSH were caring, positive and above all honest with us which we really appreciated. Charlie is under the audiology, ophthalmology, cardiology, nephrology, gastroenterology and maxillofacial clinics and plastic surgery departments. He has had eight operations on his eyes, ear and stomach, and has just been fitted with a BAHA hearing aid – which has transformed his life! He will have ear reconstruction when he is 12 years old and future operations are planned.

“So with all the help Charlie has had it was time for pay back to our friends at GOSH. The RBC Race for the Kids was it! We entered as a family last year and Charlie's brother and sister participated as well. It was a real family effort to say thanks for everything that GOSH has given to our family and to Charlie.

“We raised nearly £900 and last year we will be entering an even bigger team next year as many of our friends and family want to say thank you as well. Who knows, we may even wear fancy dress this time!

“By taking part in the RBC Race for the Kids, you are helping the thousands of children just like my son who are treated at the hospital each year. Thank you and good luck with your fundraising!”