James Matthew Barrie was born in the small weaving town of Kirriemuir, Scotland on 9 May 1860, the ninth of 10 children of a hand-loom weaver and his ambitious wife, Margaret Ogilvy.

For the first six years of his life, James (pictured right) lived in the shadow of his mother’s love for his older brother David.

Tragically, on the eve of his fourteenth birthday, David was gravely injured in a skating accident and died shortly afterwards.

While his mother derived some consolation from the notion that David would remain a boy forever, Barrie drew inspiration.

The notion of the everlasting childhood stayed with Barrie and became one of the defining reasons for his lifelong love of children, as well as the inspiration for his most famous play, Peter Pan.

It would be another 33 years before that inspiration emerged in the shape of Peter Pan, but here was the germ, rooted in his mind from the age of six. 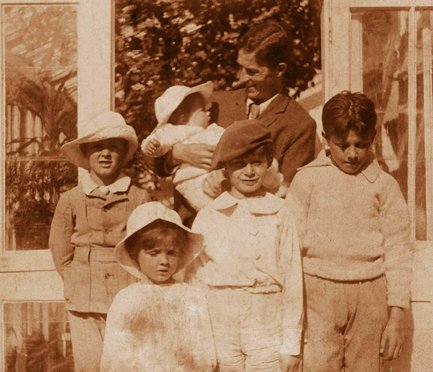 Arthur Llewelyn Davis and his sons

In Kensington Gardens in 1897, Barrie met the eldest three Llewelyn Davies boys, George, five, Jack, four, and Peter, who was still in his pram. Two more sons, Michael and Nico, joined the family in the next few years. Barrie developed a strong friendship with the children and their parents, Sylvia and Arthur.

In 1901, during a summer holiday at Barrie's country house in Surrey, he took photographs of George, Jack and Peter's exploits and games and turned them into a book, The Boy Castaways. This became the precursor to Peter Pan.

View a slideshow of these photographs, put together by Andrew Birkin.

By rubbing the five of you violently together, as savages with two sticks to produce a flame, I made the spark of you that is Peter Pan.

Sylvia and Arthur both tragically died of cancer when the boys were still young. Barrie became their guardian and, although now divorced from Mary, brought them up as his own children. His life with the boys has been explained as the strongest inspiration for the creation of Peter Pan in 1904.