The play and the novel

The original stage production of Peter Pan took place at the Duke of York Theatre, London, on 27 December 1904.

It starred Gerald du Maurier as Captain Hook (doubling up as Mr Darling) and Mr Darling, and Nina Boucicault as Peter.

Following the success of his London production, Barrie's producer, Charles Frohman, took it to Broadway in New York in 1905 where Maude Adams took on the role for over ten years.

It was still traditional in the early 20th century for the part of young boys to be played by a woman although the tradition is gradually being lost, with male actors being cast as Peter Pan in modern productions.

Tinker Bell was represented by a darting light and voiced by bells - although "Jane Wren" was listed in the original productions as the actress playing Tink. This was a joke which fooled HM Inspector of Taxes who sent Miss Jane Wren a tax demand! 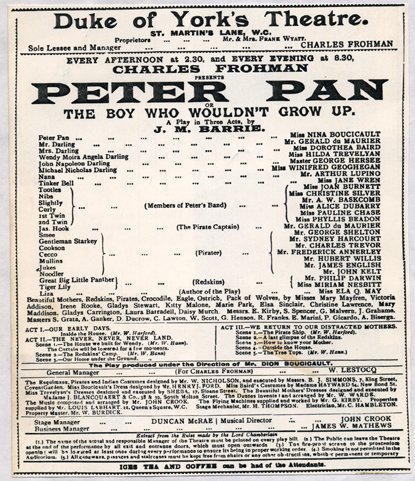 Fairy dust enabling you to fly was introduced later, to deter children from trying to fly from their beds or even windows, following reports of accidents.

The script and novel

The script was constantly rewritten, amended and added to by Barrie until it was  published in 1928 in its final form, years after the novelised version Peter and Wendy (1911).

But the directions to Neverland have never changed:

Second to the right, and straight on till morning!

Contact our theatre agents for more information on staging a production of the play (or adaptation) in the UK, US or Spain.