"Max The Brave": remembering Max at RBC Race for the Kids

Max sadly passed away from a Malignant Rhabdoid Tumour (a rare childhood cancer) in August 2019, after spending most of his life at GOSH. His family have set up a Brighter Future Fund in memory of Max and do lots of fundraising for GOSH. This year, they'll be taking part in our virtual RBC Race for the Kids.

Max was born six days late on the 29th August 2018. The birth was straightforward with Suzie having a 4-hour labour with a natural birth. “We were over the moon, he was absolutely perfect in every single way.”

“Max breastfed incredibly well from the minute he was born, we were so happy to watch our baby boy grow into such a handsome little character, always full of smiles and laughter.”

First signs something wasn’t quite right In February 2019, Max became a little unsettled at home. “We noticed a change in his breathing, so thought best to get it checked right away at our local A&E. We were seen relatively quickly; they did an X-ray and the doctor informed us that Max had a severe case of pneumonia and that he would need to stay on the ward whilst he had a course of antibiotics."

“Max began to deteriorate extremely quickly. He was now so poorly, he wasn’t feeding, he could barely breathe, and he began to pass out from lack of oxygen and pure exhaustion from working so hard. After an emergency X-ray, as we suspected this was not pneumonia, nor was it any kind of infection, it was in fact a build-up of fluid already collapsing his left lung and spreading rapidly over the right. It needed to be drained urgently, or he was going to die.”

Max was in a bad way and was quickly transferred to the Evelina hospital. “They were escorted by squad car to save Max’s life. The consultant looked me in the eye and told us to prepare to say our goodbyes as the procedure was extremely risky. The fluid had now moved to Max’s heart, so they could not be certain that the drain would be inserted into the correct place.”

“After a 2-hour procedure, Max had been saved, the fluid had been drained and he was now on a ventilator to give him a rest.”

“The next day, Max went down for a CT scan to check for the cause of the fluid build-up. Max had a large tumour growing rapidly in his chest and needed to be transferred to GOSH where they would give us a diagnosis. We left right away.”

“To be honest, when we first arrived at GOSH, I was actually quite relieved. Because of the journey we’d had at our local hospital and because Max’s illness was so rare, they’d had no idea how to treat it and they didn’t specialise in anything like that. Arriving at GOSH, we knew we were in one of the best children’s hospitals in the UK, in the world even, so we had a little bit of peace of mind. If we were going to be treated anywhere, this is where we wanted to be.”

Max went straight into intensive care when he arrived at GOSH and underwent various tests to get a diagnosis. “After two long weeks of waiting, we were called into the parents meeting room, the world was upon our shoulders. Max had been diagnosed with a Malignant Rhabdoid Tumour, a highly malignant childhood cancer. The prognosis was not good.”

“There was never anyone who told us that they wouldn’t try. It was really reassuring to have the faith and belief of the doctors and nurses at GOSH; they believed that we had a chance, albeit only a small one but we knew they would never give up.”

“Treatment began right away; Max had a double-lumen Hickman line inserted into his side to have intensive chemotherapy administered every two weeks. This killed off every cell in his body, which meant he had to take a cocktail of medications to counteract the side effects caused by the chemo. My previous worries of giving too much Calpol now seemed ridiculous.”

“Max was so poorly, he struggled to make it out of ITU, which meant we had to leave him every night to stay in the hospital accommodation. We are so grateful that’s around because we don’t live locally, so it would have taken us about an hour and a half to travel into the hospital each day. So be able to just walk around the corner was just amazing. It’s never nice having to leave your child, but we knew that when he was in ITU, he was under 24-hour one-on-one supervision, so it gave us peace of mind to know we were so close by."

“Max then caught a fungal infection that had taken over his body and spread to his lungs, we were told again to prepare for the worst. We feared that we would never see his smile again." 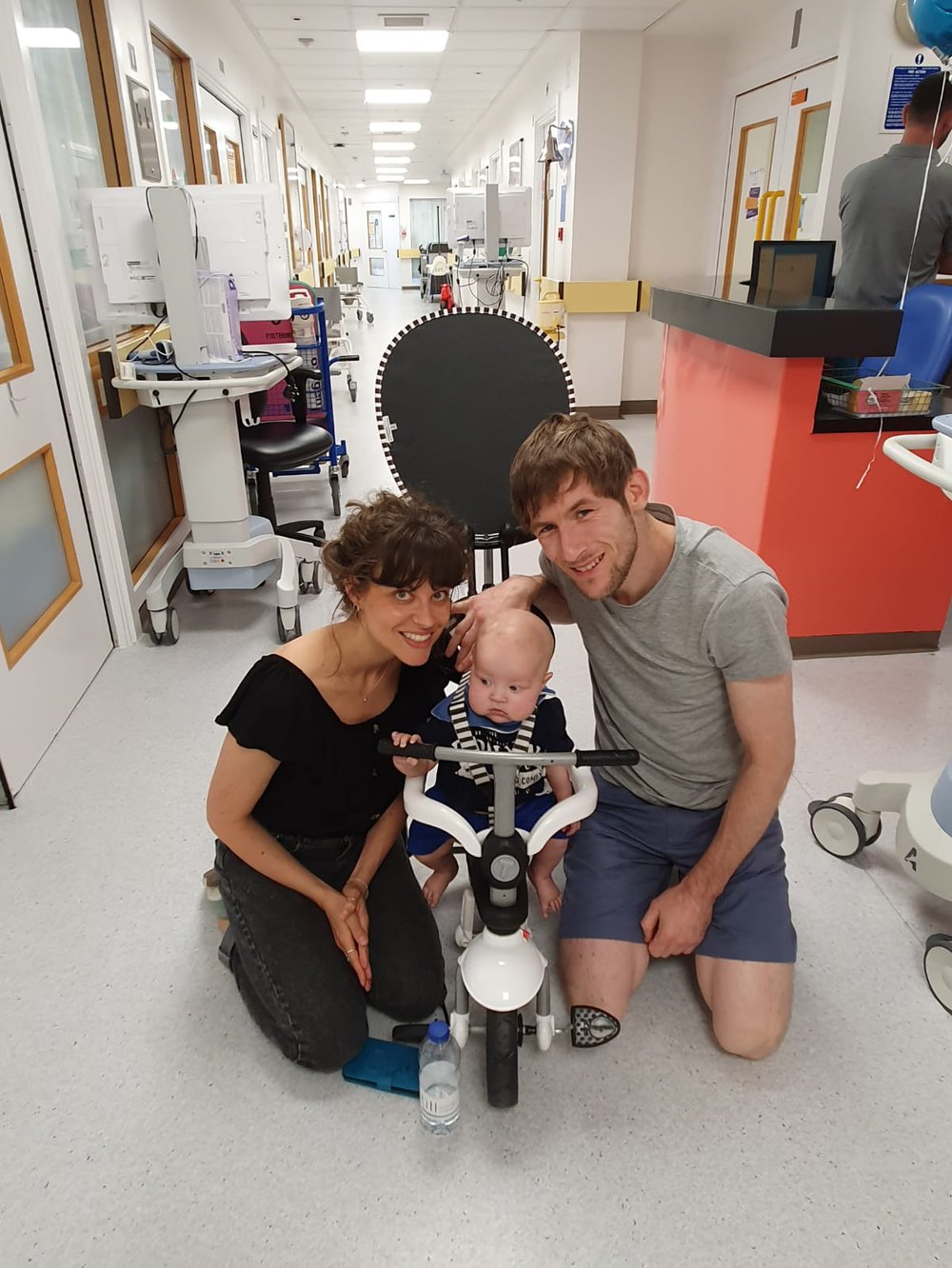 Going back onto the wards

“A new Hickman line was inserted, along with two more chest drains and then things started to change. We began to see improvement and finally made it out of intensive care and up to the ward – after seven long weeks."

“It was such a relief to get back onto the wards. You just learn to live minute by minute – you have to put the diagnosis to the back of your mind and just get over each hurdle as it comes. We practically lived there for a time. We went home for one day, but Max got a temperature from the chemotherapy treatment, so we went straight back into Giraffe Ward."

“Max’s health continued to improve, the tumour was shrinking, and the fungal infection was on its way out. He was smiling again, laughing and dancing, he had everyone on the ward doting on him. Max did a great job at harvesting his cells ready for high dose chemotherapy and we were even preparing for surgery to remove most of the tumour."

The staff at GOSH

“I felt at home at GOSH. We made friends with the nurses. Sometimes they would come in and give me a hug and make me a toast, I just felt close to them. Sometimes we just spoke about what we were watching on Netflix, it didn’t always have to be clinical. They become your friends because you don’t see your friends anymore, you just see the hospital. The cleaners of the ward just loved Max as well, Max loved it when they came in and danced to the radio with him. I think Max touched the hearts of many people on the wards."

“The staff allowed us to have the chance to see Max again and to have some sort of quality of life. Even though he was so young, he was still happy to be in the room on the ward, he enjoyed his time there. They also allowed us to be able to say goodbye to him, I’m not sure that would have been the case if we hadn’t been treated at GOSH."

“I also got very close with Lauren from the Play team. She sorted little canvases for us, including one for Mother’s Day. Even when we were in isolation, they never forgot about us and always came to see us, with sensory toys and things so he didn’t miss his milestones. Max loved painting, well just making a mess really! The play team helped us to get a break, if I needed a coffee, they would look after Max. They could just lift the mood if I didn’t have the energy to think of a game to play. Lauren came to Max’s funeral, which meant the world to us.” 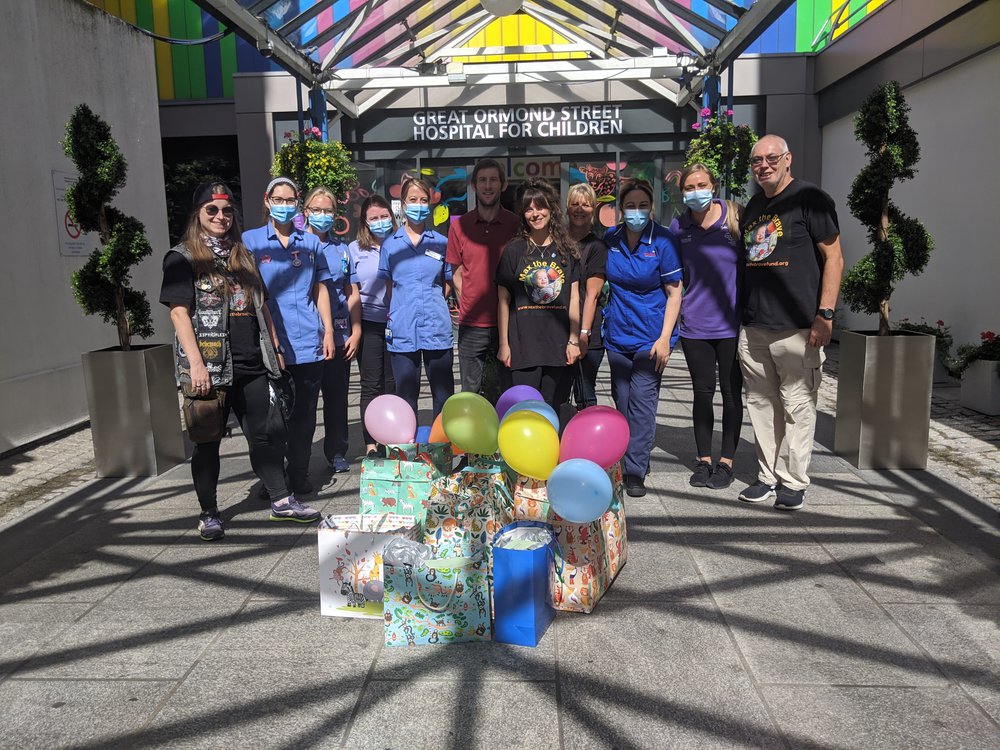 “On the 11th July 2019, our world came crashing down. Max had been for a CT scan that morning to confirm some details for surgery, but surgery was no longer an option, nor was the high dose chemotherapy. The tumour had grown, the chemo was no longer working and there was no other treatment available.”

“We requested to go home and enjoy what precious time we had left. We created memories that lasted forever. Sadly, no time is ever enough.”

Max’s family took him to Christopher’s (Shooting Star Children’s Hospices) in Guilford to spend his final days there together. “The palliative care team at Christopher’s gave him medicine so that he did not have to feel any pain or panic with the breathlessness, and on 11th August 2019 at 8.37pm Max passed away cradled in our arms.”

Taking part in RBC Race for the Kids

“We had a team of about 20 of us that were running last year, and we raised about £7,000. It was only about a month after Max had passed away, but it felt like something so positive; we were doing it for him.

“I’d actually done the race the year before I was pregnant with Max, when I was first starting to get into running. Never did I ever think I would ever benefit from the charity."

“Our original plan was to do the race with Max; we’d hoped he would be cured by then. We were first thinking about it in June which is when Max was really well. Then in July we were told that there was no further treatment, and all discussions about taking part took a backseat."

“We got to September and I just thought what else are we going to do? I remembered that we were going to do the race and I thought we could still do it. We made little Max the Brave t-shirts and had a really nice time; it was wonderful to bring all the family over for something positive, as the last time we had all been together was at Max’s funeral. To all meet up for something happy, we were all buzzing afterwards.”

“The fundraising helps me feel like I’m still being a mum to Max, because I’m not going to get to take him to football practice, or buy school uniform, so my way of doing that for him is to help other children. It’s all in his name and in his memory, so it makes me feel like I’m being his mum, I know I always will be.”

This year, team Max the Brave will once again be taking part in RBC Race for the Kids on the weekend of October 17 - 18. They're embracing our new-look virtual event and will crossing their own finish line at home. Will you join them? You can run, walk, skip or scoot the race however and wherever you want. Sign up now and help make a difference to seriously ill children like Max.